Recently, rapper and online “personality” Lil Nas X made headlines with his limited run of “Satan Sneakers,” which were seemingly designed by a 15-year old that had just left Hot Topic and was asked what kind of shoes would match his black fingernail polish. Not to be outdone, Ford has announced that they are currently working on an all-new SUV called the Lincoln Lucifer, a six-passenger, six-wheel model with automatic six-speed transmission. I had a chance to take a good look at this new luxury SUV, and I must say, if the devil exists, then his efforts to seduce humanity have become really, really lame.

Inspiration for the all-new Lincoln Lucifer no-doubt has come from the widespread attention gained by Lil Nas X with his Satan Sneakers. Those shoes, which are only available in black, feature pentagrams, upside-down crosses, and other iconography straight from the history folder of a teenager who just heard his first Black Sabbath album. Other noteworthy aspects of the so-called Satan Sneakers are the fact that they feature drops of human blood manufactured into the sole, only 666 of them are available, and they include a Bible verse from Luke 10:18 (coincidentally, this also allowed them to sell them for $1,018 each!).

Not to be outdone by a pair of shoes, the Lincoln Lucifer really doubles down on the edge-lord goth aesthetic and satanic imagery. I feel I should point out, however, that while an upside-down cross has been used as an icon of Satanism, it’s a very poor one. For nearly 2,000 years, the inverted cross has been the symbol of the Pope––due to Saint Peter asking to be crucified in this manner, as he felt himself unworthy to die in the same way as Christ. Nothing says “Hail Satan” quite like running around waving the symbol of the Papacy! The all-new Lincoln Lucifer features pentagrams on the hubcaps; since a pentagram is only associated with Satan when it’s upside-down, however, you’re only being spooky and satanic a few times per second, not constantly. 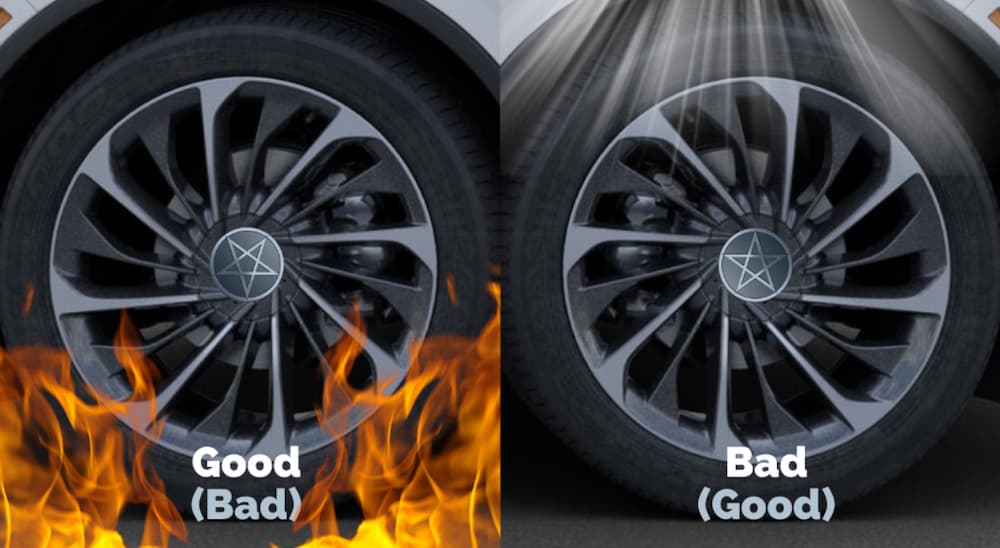 Numerous inverted crosses adorn the vehicle’s exterior and interior, and the upholstery is woven with hair stolen from several European nunneries. Nun hair makes about as much sense as anything else with these things.

Early designs used a drop or two of human blood in the red paint used on the vehicle, but this got lost in the mix. Additional quantities of blood were used, but still the result was uninspired. Finally, the exterior was simply coated in a massive wash of human blood; blood dries brown, of course, so the end result is less spooky and more dumb. But I’d say that’s the general goal for this vehicle and the sneakers that inspired it…

As I pointed out earlier, the Lincoln Lucifer has seating for six passengers, has six wheels (yes, that’s right––don’t ask), and a six-speed transmission. This is a pretty poor transmission for a modern vehicle. When I asked why they didn’t simply use a V6 engine for the desired “666” effect, the Ford representative simply stared at me blankly for a moment and then walked away, mumbling some profanity. The Lucifer lacks a catchy Bible quote or reference to Satan, however, due to the designers’ inability to find a passage about the devil in any book with 50: or higher as a notation for it.

As of right now, the Lincoln Lucifer is planned as a special edition and a limited run. I asked if only 666 of them would be available, and the Ford representative said, “No, that’s dumb. We want to sell thousands of these pieces of [censored].”

Editor’s Note: We reached out to Ford for a comment on this article, but we’re yet to receive a reply. Despite the silence, we’re sure this is definitely a meaningful statement about the nobility of the human spirit and our tendency toward rebellion and freedom; rather than a crass ploy or publicity stunt designed to drum up controversy and sell a new album– we mean vehicle. Yes, that’s it. Thank you.