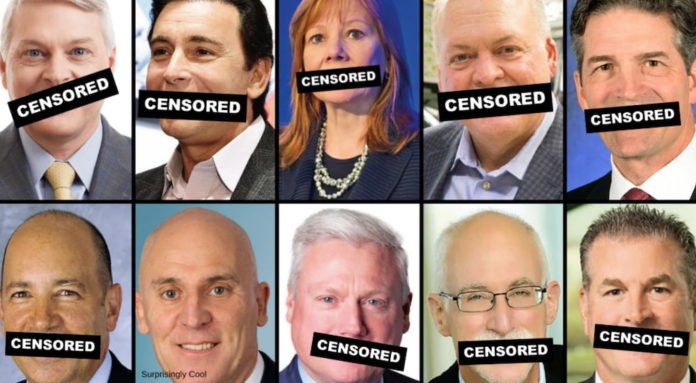 Once upon a time, really-super-smart people would say really-super-smart things, and only their close family, friends, and coworkers got to hear it. Now, however, we live in an exciting timeline where social media allows millions of people to be privy to every single thought from every single person. Some have called this the death of civility and the ultimate dumbing-down of our frail civilization. Others have agreed with that.

Twitter is among the most interesting forms of communication out there because it’s not designed as an avenue for conversation. Sure, people can have a back-and-forth exchange, but the real principle behind it is the ability to simply shout whatever you wish out into the ether for the universe to enjoy. Over the years, a number of auto industry executives have used Twitter to share some thoughts and opinions they’ve had.
While many of these remarks and Tweets have since been deleted, I managed to see them, and I’m here to share all the juicy bits with you, my dear readers.

Recently, one auto exec was kind enough to share their thoughts about women in the workplace and in the world in general. They reTweeted, “Get married, cook your husband dinner, & homeschool your kids,” as general advice to any young ladies in the audience. This reTweet went on to add, “Anything but a conservative, traditional way of life is wrong. I won’t pat you on the back for choosing different. You are wrong.”

This paragon of the modern age also posted, “You know what makes me feel the most empowered as a woman?” Fortunately, we didn’t have to wait to find out as she answered her own question: “It’s being a good housewife and cooking for my husband.”

Although the auto executive in question deleted this reTweet, I can’t imagine why. Obviously, this makes a lot of sense. We all know that a woman’s place is in the house and in the kitchen – cooking, cleaning, and keeping a tidy house. She should also remain five feet behind her husband whenever they’re out walking together, ask his permission to see her family, and if she’s fortunate enough to have her husband at home during his time off from work, she should remain silent so that he doesn’t have to hear the grating tones of the female voice.

I assume the auto exec took down this reTweet because of manufactured outrage by the condescending liberal elite. It certainly couldn’t be because their car company doesn’t pay the majority of their workers enough to allow for a single-income household. Heavens no.

Of course, the auto industry is no stranger to exciting things happening over Twitter. Just last year, there was a “firestorm” when the phrase “OK, boomer” went out on BMW’s official Twitter account. This caused all sorts of people to get up-in-arms and make comments about the quality of BMW cars, further justifying the original Tweet. I, for one, certainly appreciate when auto companies manage to glom onto “popular” trends. I assume we’re only days away from Ford Tweeting some dank Pepe the Frog memes and Chevy offering a litany of “MFW” responses.

Similarly, about a decade ago, a man was fired from Chrysler because he forgot he was on their account, rather than his own private account when he complained about being stuck in traffic. Sure, he used an F-bomb, but any auto company out of Detroit should be used to that. Hell, I assumed it was part of their regular Twitter feed; I know if I was following Chrysler’s Twitter account, I’d expect a lot of swearing and probably some full-frontal male nudity. You hear me, Chrysler? It’s time to hang dong!

Who Cares about Safety Anyways?

Finally, one of the heads at [Manufacturer Name Redacted] was at the center of controversy when he Tweeted, “Who cares about safety? Most of you idiots turn off the safety features anyways!” While that’s not statistically accurate (the “most” part), it’s also not entirely untrue. A lot of people do turn off advanced safety features.

In response to this Tweet, another manufacturer responded with, “Lolz, maybe the idiots will all crash. #NaturalSelection #BellCurve” To which the original corporate officer replied with “noice,” and at that point, a flame war ensued between these two companies and the left-wing nuts.

Their commentary, while accurate, was met with a lot of backlash and the Tweets were taken down. Twitter CEO Jack Dorsey threatened to take away their privileges like that of our true President Donald Trump.